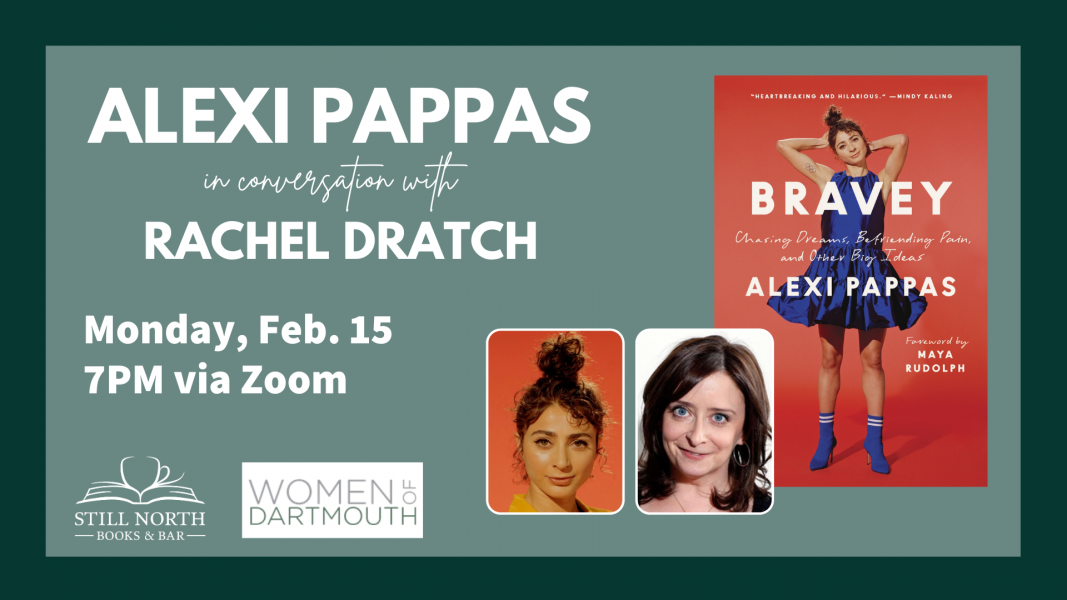 Alumnae Authors: In Their Words
Bravey by Alexi Pappas

Please join us for the second virtual book club in a series of four events held in partnership with Women of Dartmouth. Each quarterly event features an alumna author as a guest speaker.

This quarter, we will hear from Alexi Pappas '12, Olympic runner, filmmaker and writer, whose new book Bravey shares what she's learned about confidence, self-reliance, mental health, embracing pain, and achieving your dreams. Alexi will be joined in conversation by Rachel Dratch '88. Reading the book is encouraged, but not required to attend. This event is co-hosted by Women of Dartmouth and is free and open to all.

Bravey is filled with personal stores that span from Pappas' early search for female role models, to her ongoing fight to pursue both her athletic and creative dreams, to learning about motherhood from a chance meeting with Maya Rudolph, who wrote the foreward to the memoir. Pappas' charm and go-after-it-attitude are evident throughout, as she reveals her honest and entertaining reflections on each touchstone moment and the valuable lessons she learned along the way — foremost among them, how to be brave.

Alexi Pappas '12 is an award-winning writer, filmaker, and Olympic athlete. Her writing has appeared in The New York Times, Runner's World, Women's Running, Sports Illustrated, The Atlantic, and Outside, among other publications, and she has been profiled in The New York Times, Sports Illustrated, New York, and Rolling Stone. Pappas co-wrote, co-directed, and starred in the feature film Tracktown with Rachel Dratch and Andy Buckley. Most recently, she co-wrote and starred alongside Nick Kroll in Olympic Dreams, the first non-documentary-style movie to ever be filmed at the Olympic Games. A Greek American, Pappas holds the Greek national record in the 10,000-meters and competed for Greece in the 2016 Olympics. She lives in Los Angeles, California.

Rachel Dratch '88 is an actress, comedian, and writer. After graduating from Dartmouth, she moved to Chicago where she was a part of The Second City. She is known for her work on Saturday Night Live, and has recently appeared in the movie Wine Country (2019), as well as the TV series Shameless, Broad City, Bob's Burgers, and many more. She is also the author of the memoir Girl Walks into a Bar (Avery, 2012).