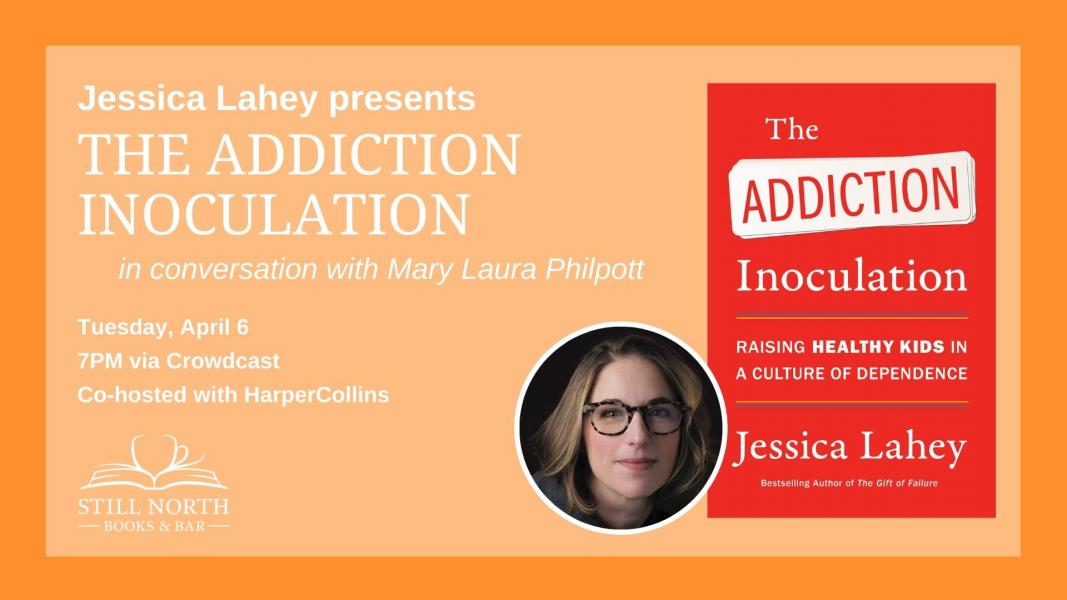 Register for the Crowdcast

Join HarperCollins, Still North Books & Bar, and a handful of our favorite indie bookstores across the country to celebrate the release of The Addiction Inoculation: Raising Healthy Kids in a Culture of Dependence by Jessica Lahey. Jessica will be joined in conversation by Mary Laura Philpott.

Purchase a copy of the book through Still North to receive a signed bookplate.

Born into a family of alcoholics and drug abusers, Jessica Lahey spent her early adulthood trying frantically to thwart that multi-generational genetic legacy. She ultimately failed; descending into alcoholism in her thirties, she didn't find her way out until her early forties. After years in recovery, Lahey was determined to protect her two adolescent sons from their most dangerous inheritance. An outgrowth of her sobriety and years as a teacher in a substance abuse program for teens, The Addiction Inoculation is Lahey's gift to her children and her students: "Once I'd faced my own addictions, I was desperate to learn more about my children's risk and understand the steps I could take to inoculate them against substance use disorder."

Jessica Lahey writes about education, parenting, and child welfare for The Atlantic, The Washington Post, and the New York Times. She is the author of the New York Times bestselling book, The Gift of Failure: How the Best Parents Learn to Let Go So Their Children Can Succeed. Lahey is a member of the Amazon Studios Thought Leader Board and wrote the curriculum for Amazon Kids' The Stinky and Dirty Show. She lives in Vermont with her husband and two sons.

Mary Laura Philpott is the author of I Miss You When I Blink, the nationally bestselling memoir-in-essays. Her writing has been featured frequently by The New York Times and also appears in such outlets as The Washington Post, The Atlantic, Paris Review Daily, O The Oprah Magazine, Real Simple, and others. Across her work, Philpott examines the overlap of the absurd and the profound in life, literature, and culture.

The Addiction Inoculation: Raising Healthy Kids in a Culture of Dependence (Hardcover)