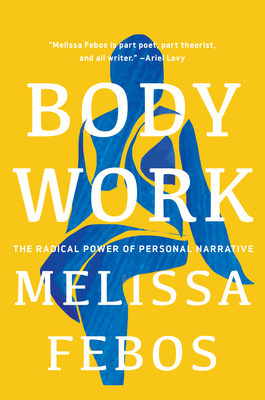 Memoir meets craft master class in this “daring, honest, psychologically insightful” exploration of how we think and write about intimate experiences—“a must read for anybody shoving a pen across paper or staring into a screen or a past" (Mary Karr)

In this bold and exhilarating mix of memoir and master class, Melissa Febos tackles the emotional, psychological, and physical work of writing intimately while offering an utterly fresh examination of the storyteller’s life and the questions which run through it.

How might we go about capturing on the page the relationships that have formed us? How do we write about our bodies, their desires and traumas? What does it mean for an author’s way of writing, or living, to be dismissed as “navel-gazing”—or else hailed as “so brave, so raw”? And to whom, in the end, do our most intimate stories belong?

Drawing on her own path from aspiring writer to acclaimed author and writing professor—via addiction and recovery, sex work and academia—Melissa Febos has created a captivating guide to the writing life, and a brilliantly unusual exploration of subjectivity, privacy, and the power of divulgence. Candid and inspiring, Body Work will empower readers and writers alike, offering ideas—and occasional notes of caution—to anyone who has ever hoped to see themselves in a story.

Melissa Febos is the author of the memoir Whip Smart; Abandon Me, a LAMBDA Literary Award finalist and Publishing Triangle Award finalist; Girlhood, a national bestseller and National Book Critics Circle finalist; and the forthcoming Body Work: The Radical Power of Personal Narrative. A recipient of the Jeanne Córdova Nonfiction Award from LAMBDA Literary and of fellowships from the National Endowment for the Arts, MacDowell, Bread Loaf, Lower Manhattan Cultural Council, The BAU Institute, Vermont Studio Center, The Barbara Deming Foundation, and others; her essays have appeared in The Paris Review, The Believer, McSweeney’s Quarterly, Granta, The Yale Review, Tin House, The Sun, New York Review of Books, and The New York Times Magazine. She is an associate professor at the University of Iowa, where she teaches in the Nonfiction Writing Program.

"A welcome 'holistic approach' to writing and healing . . . Body Work grants writers rare permission to take themselves, and their pain, seriously . . . It is satisfying to read such unity of vision." —Noor Qasim, The New York Times Book Review

"Melissa Febos is at the vanguard of this particular boom in confessional writing, and she is the guide I point my students to when they want to write in this style . . . Body Work, I learned over its 192 taut pages, is an explanation of why stories like Febos’s are powerful . . . Body Work helped me learn how to work alongside and through my ongoing pain by forging a creative outlet. I’m grateful to Febos for the lesson in how to do it." —Adam Dalva, The Atlantic

"Although the essays . . . are all personal narratives themselves (as opposed to straight-up craft essays with clear dos and don'ts for the aspiring or practicing writer), they also provide practical and philosophical arguments for the expansiveness that such narratives allow and for their power in the world . . . Febos encourages her readers to tell their stories, to write them, for themselves or others. In this way, Body Work, is in itself an example of the strength of personal narrative; it's also an argument for how such narratives inevitably create space for community as well as a freer self." —Ilana Masad, NPR

"This original, lyrical collection weaves memory and teaching—about craft, about trauma and healing, about social justice—into an ode to personal writing that couldn’t come at a more critical time . . . Illuminating . . . This is a book that explores self-reflection as a path to rebirth." —Jean Guerrero, Los Angeles Times

"Targeted to the writer who fears their personal narrative would be seen as self-indulgent, hurtful to others, or simply not worthy of their time and talent . . . I found myself underlining passage after passage, eager to read them aloud to my own nonfiction students who oohed and ahhed in recognition . . . Generous-hearted . . . Wise . . . Empowering." —Alysia Abbott, The Boston Globe

"Champions the transformative act of writing by way of personal wounds: secrets, traumas, vulnerabilities, and non-conformities. Just as powerfully, [Febos] reckons with the noxious assumption that we’re not worthy of telling our stories, hindering our instincts of exploration and release . . . Febos channels empathy—which she believes every emerging writer should practice and receive—into the emboldening cri de coeur that is Body Work." —Sarah Moroz, Elle

“Piercing . . . Prepare to rave about this book to everyone you've ever met, seriously." —Lucy Morgan, Glamour UK, A Most Anticipated Book

"Contains multitudes . . . In Body Work, Febos offers a compelling rebuttal of the accusation that a memoir is simply a diary in print . . . Body Work asks the fundamental questions with which our literature, and our culture, are currently grappling. Which version of the story is yours, which is mine, which is true? Is there room in our American house for more than one story, or more than one version of the same story?" —Meredith Maran, Oprah Daily

"Body Work is a riveting read full of encouragement and inspiration that will drown out your inner critic and help you see that your story is valid and worth writing." —Bust, Adrienne Urbanski

"A compelling case for the transformative power of language and storytelling." —Sarah Neilson, Shondaland

"A blend of master class and memoir, [Febos] defends the aesthetic and social value of personal writing. Weaving together anecdotes and allusions to literary, psychological, and religious works, as well as advice she refined while teaching graduate workshops, Febos shows how treating sex writing as taboo upholds oppressive conventions." —Maddie Crum, Vulture

"Navigates the relationship between mind and body, how they are less separated than we think, and how our bodies dictate the way we remember and tell stories. A craft book at its core, the ideas presented will invoke thoughts about process for writers, but it's an insightful read whether you're a writer or not." —Kaitlin Stevens, BuzzFeed

"A bright guiding light for anyone who’s ever felt ashamed or afraid of telling their story . . . Whether Febos is touching on the tricky territory of writing about other people or telling complicated, contradictory truths or about sex writing as a site where we often lay bare the harmful beliefs we have internalized, she never doubts—and indeed, actively affirms—the necessity of memoir." —Sarah Neilson, them

"You needn’t be a writer to be inspired and educated by Body Work. The author’s razor-sharp insights are pertinent to anyone who wants to excavate their own truths; interrogate their traumas and their shame; and, especially, take ownership of their narratives . . . Whether you wish to write to publish or to simply to bear witness and feel heard, there’s much in Body Work that will validate your aspirations and inform your process. Febos inspires and encourages and insists not only that personal narratives are valuable but also that creating and sharing them are imperative. If you’ve been shamed, made vulnerable, been traumatized, told that your story isn’t yours to tell, Body Work will speak to you." —B.K. Jackson, Severance

"[Febos's] ask, and the one that justifies the book’s use of 'radical' in its subtitle, is not just that her reader become a writer, but rather that she become a kind person who also writes books. By this I mean someone who has thought through her own motives for living the way she does; for narrating her life the way that she does; and who has worked hard at neither living out, nor writing down for someone else, the narratives that constrict, disempower, or shame." —Elizabeth Barber, The Rumpus

"An articulate call for understanding writing, especially autobiographical writing, as part of a larger liberatory politics, one that relies as much on deep personal introspection, as on collective and aesthetic engagement." —Amanda Montei, Electric Literature

"Rigorous and thoughtful, deeply wise and generous . . . I knew I wouldn’t be alone in feeling like it really was written for me, so perfectly did it answer ethical, creative, and practical writing questions that have been swirling in my mind forever." —Lilly Dancyger, Los Angeles Review of Books

"Febos consistently proves her skills as a memoirist. She not only succeeds at revealing herself and emotional truth, but also entertains as she does it. Body Work promises not only to delve into the intimate depths of her experiences in trauma, but also the work of writing itself." –Ian MacAllen, Chicago Review of Books

"A boldly feminist essay collection that explores how autobiographical writing can help one face past regrets and trauma . . . Concise yet weighty . . . These forthright essays make a clear case for writing as (incidentally) therapeutic. Practical and empowering, they prepare would-be writers for an "emotional confrontation with the self." —Shelf Awareness (starred review)

“Whip-smart . . . Shrewd takes on the intersection of craft and life . . . This is a wonder.” —Publishers Weekly (starred and boxed review)

"A book for both writers and readers who feel like their bodies are telling stories . . . Wide-ranging in its theoretical and historical breadth yet intimate in all ways, Febos’s book offers the tools readers need to identify, access, process, and articulate hard-won stories of trauma and of love that their flesh holds." —Library Journal (starred review)