The Comic Book Story of Beer: The World's Favorite Beverage from 7000 BC to Today's Craft Brewing Revolution (Paperback) 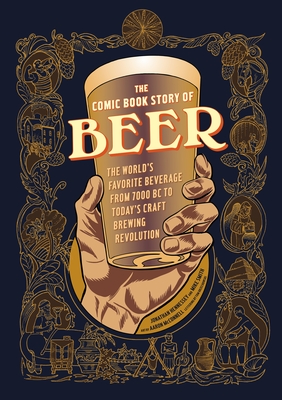 A full-color, lushly illustrated graphic novel that recounts the many-layered past and present of beer through dynamic pairings of pictures and meticulously researched insight into the history of the world's favorite brew.

The History of Beer Comes to Life!

We drink it. We love it. But how much do we really know about beer? Starting from around 7000 BC, beer has emerged as a major element driving humankind’s development, a role it has continued to play through today’s craft brewing explosion. With The Comic Book Story of Beer, the first-ever nonfiction graphic novel focused on this most favored beverage, you can follow along from the very beginning, as authors Jonathan Hennessey and Mike Smith team up with illustrator Aaron McConnell to present the key figures, events, and, yes, beers that shaped and frequently made history. No boring, old historical text here, McConnell’s versatile art style—moving from period-accurate renderings to cartoony diagrams to historical caricatures and back—finds an equal and effective partner in the pithy, informative text of Hennessey and Smith presented in captions and word balloons on each page. The end result is a filling mixture of words and pictures sure to please the beer aficionado and comics geek alike.

JONATHAN HENNESSEY is the author of two previous nonfiction graphic novels, The U.S. Constitution: A Graphic Adaptation and The Gettysburg Address: A Graphic Adaptation, as well as the history-based time travel series Epochalypse. Based in Los Angeles, he works in film and television.

MIKE SMITH has worked in breweries large and small for the last two decades. He is currently head brewer at Back East Brewing Company in Bloomfield, Connecticut.

AARON McCONNELL illustrated The U.S. Constitution: A Graphic Adaptation and The Gettysburg Address: A Graphic Adaptation, as well as various other nonfiction, historical fiction, and fantasy comics. He is a graduate of the Rhode Island School of Design and a member of Periscope Studio in Portland, Oregon. You can find more of his work at aamcconnell.com

"Wildly informative...the depth of the information and breadth of history packed into these 170 pages is astounding."
—Men's Journal

"In ancient times, farmers worried about losing precious grain to spoilage during wet winters. So they figured out how to malt grain and brew it into beer, thus preserving a nutritious source of calories. In The Comic Book Story of Beer, due out in September, we get a graphical tour of such pivotal moments—from the cradle of agriculture to the modern-day craft beer heyday."
—Alastair Bland, NPR

"This latest hop- and barley-inspired feat certainly deserves a clinking of glasses—The Comic Book Story of Beer is something all beer, history and comic book nerds can enjoy."
—Tiffany Do, Food Republic

"Nothing less than the history of human civilization itself. This endlessly entertaining and assiduously researched chronicle spans the ages as it recounts the role of this beloved beverage in politics, art, religion, agriculture, chemistry and more. The episodic narrative is smartly explored and quite ably illustrated. For a heady splash of history that goes down quite smoothly, this book’s for you!
—Richard Pachter, Miami Herald

"With meticulous research, the authors open the readers’ minds to the possibility that beer helped shape the course of civilization, not only by sharing the provocative 'beer theory of agriculture' but showing how, in each age, beer played a significant role in helping shape human affairs. McConnell’s illustrations are a perfect accompaniment; his sometimes amusing, sometimes intriguing, and sometimes provocative visuals have all the qualities of this favorite beverage. The abundance of interesting little details in these illustrations pair well with the wealth of information that the authors provide."
—Publishers Weekly

"In tracing the history of beer, Back East Brewing Company’s Mike Smith and author Jonathan Hennessey do a convincing job of linking it to every important development in human history, from the dawn of agriculture through both world wars. The graphic format proves ideal for distilling centuries’ worth of detail into one easy-to-digest package"
—Punch

“This book covers the history of beer in easily consumable, pint-sized portions. The only thing it won’t give you is a hangover! (Although I confess that it made me thirsty enough to down several beers  while reading it.) It’s a fun, funny, and enjoyable read—exactly what a book about beer should be...even though most aren’t.”
—Zane Lamprey, International Drinking Ambassador and host of Three Sheets, Drinking Made Easy, and Chug

“A well researched, entertaining, interesting, informative, and iconoclastic account of the history of beer. Everything is covered from beginnings in Mesopotamia, the Black Death, the emergence of hopped beer, and the industrialization and development of brewing science to modern craft brewing, and all is presented in a very attractive graphical form.”
—Dr. Terry Foster, beer historian, brewer, and author of Pale Ale and Brewing Porters and Stouts

“For someone who was a comic book geek before a beer geek, The Comic Book Story of Beer seamlessly melds both worlds. McConnell’s lavish art is rich and vibrant, perfectly illustrating the high points of a story as old as civilization itself. Both fun and educational, it nicely shows how beer’s story is humankind’s story.”
— Jay R. Brooks, syndicated newspaper columnist and beer writer