Five Days Gone: The Mystery of My Mother's Disappearance as a Child (Hardcover) 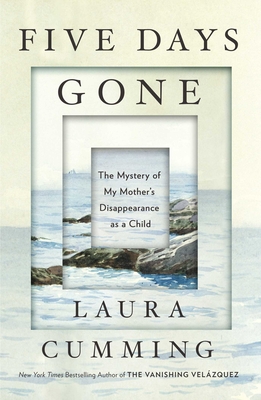 Set in 1929, Cumming's riveting memoir takes off by recounting her mother's kidnapping at the age of three--an event she wouldn't learn of until half a century later. Linking findings from photographs, historical documents, and works of arts, the author discovers more than one secret was kept from her mother throughout her childhood, and aims to rewrite her story as it truly occurred. Ultimately, she delivers a profoundly moving narrative on the intimacy of mother-daughter relationships and the care required of keeping legacies alive.

In the fall of 1929, when Laura Cumming’s mother was three years old, she was kidnapped from a beach on the Lincolnshire coast of England. There were no screams when she was taken, suggesting the culprit was someone familiar to her, and when she turned up again in a nearby village several days later, she was found in perfect health and happiness. No one was ever accused of a crime. The incident quickly faded from her memory, and her parents never discussed it. To the contrary, they deliberately hid it from her, and she did not learn of it for half a century.

This was not the only secret her parents kept from her. For many years, while raising her in draconian isolation and protectiveness, they also hid the fact that she’d been adopted, and that shortly after the kidnapping, her name was changed from Grace to Betty.

"This is an incredible, and incredibly unusual, book about family, secrets, the ruinous sexual shame and hypocrisy of the first half of the English twentieth century. It’s one of the best memoirs I have ever read... There is so much about [Five Days Gone] that moves; there is so much about it that educates. It is, and will remain a favorite, to be re-read one day, to be recommended to anyone who will listen."
— Nick Hornby, The Believer

“One of the most compelling memoirs of recent years, a book with as many twists and turns as any mystery, a family history of great emotional resonance… It’s an extraordinary story, and an even better book.”
— The Los Angeles times

"Laura Cumming's tale of pictures, secrets and the strange disappearance of her mother is an outstanding achievement... Enthralling... Much more than a search for truth. It is a moving, many-sided human story of great depth and tenderness, and a revelation of how art enriches life. In short, a masterpiece."
— Sunday Times (UK)

"Illuminating and deeply touching... a mystery solved through empathy and interpretation. It feels as if this is the book Cumming has been working towards, a deeply personal story but one that also draws on practised skills as a critic and a writer. It is perfectly balanced between the requirements of its narrative and the expression of its author’s passions. It is a moving tribute from a daughter to her parents and grandparents. It is beautifully written. And at its heart is Cumming’s belief in interpretation as a process of understanding, not just of art but of our lives and actions."
— The Spectator (UK)

“Reads like a thriller…Questions and lies abound in this touching book about a daughter’s quest to help her aging mother uncover her true identity.”
— Publishers Weekly

“A satisfying mystery that could have been grist for Agatha Christie's mill. [Cumming’s] nuanced, pensive account restores reality and vitality to figures from out of the past, making them meaningful while uncovering their secrets.”
— Kirkus

"By turns beautiful, wistful, and ominous... Every bit as complex as any served up by fiction, and, oddly enough, the dénouement – or succession of dénouements – is just as satisfying, perhaps more so... so familiar as to be universal."
— Daily Mail

Praise for The Vanishing Velazquez

"A brilliant tribute... Cumming's pages pulse with the power of art to change lives."
— The Atlantic