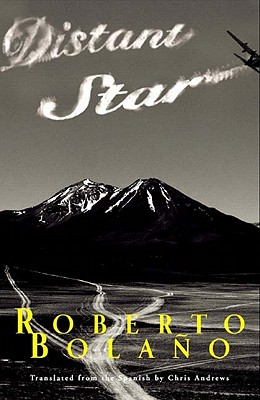 A chilling novel about the nightmare of a corrupt and brutal dictatorship.

The star of Roberto Bolano's hair-raising novel Distant Star is Alberto Ruiz-Tagle, an air force pilot who exploits the 1973 coup to launch his own version of the New Chilean Poetry, a multimedia enterprise involving sky-writing, poetry, torture, and photo exhibitions.

For our unnamed narrator, who first encounters this "star" in a college poetry workshop, Ruiz-Tagle becomes the silent hand behind every evil act in the darkness of Pinochet's regime. The narrator, unable to stop himself, tries to track Ruiz-Tagle down, and sees signs of his activity over and over again. A corrosive, mocking humor sparkles within Bolano's darkest visions of Chile under Pinochet. In Bolano's world there's a big graveyard and there's a big graveyard laugh. (He once described his novel By Night in Chile as "a tale of terror, a situation comedy, and a combination pastoral-gothic novel.")

Many Chilean authors have written about the "bloody events of the early Pinochet years, the abductions and murders," Richard Eder commented in the The New York Times: "None has done it in so dark and glittering a fashion as Roberto Bolano."

Author of 2666 and many other acclaimed works, Roberto Bolano (1953-2003) was born in Santiago, Chile, and later lived in Mexico, Paris, and Spain. He has been acclaimed “by far the most exciting writer to come from south of the Rio Grande in a long time” (Ilan Stavans, The Los Angeles Times),” and as “the real thing and the rarest” (Susan Sontag). Among his many prizes are the extremely prestigious Herralde de Novela Award and the Premio Rómulo Gallegos. He was widely considered to be the greatest Latin American writer of his generation. He wrote nine novels, two story collections, and five books of poetry, before dying in July 2003 at the age of 50.

Chris Andrews was born in Newcastle, Australia, in 1962. He studied at the University of Melbourne and taught there, in the French program, from 1995 to 2008. He also taught at the University of Western Sydney, where he was a member of the Writing and Society Research Center. As well as translating nine books by Roberto Bolano and ten books (and counting) by César Aira, he also brought the French author Kaouther Adimi’s Our Riches into English for New Directions. Andrews has won the Valle-Inclán Prize and the French-American Foundation Translation Prize for his translations. Additionally, he has published the critical studies Poetry and Cosmogony: Science in the Writing of Queneau and Ponge and Roberto Bolano's Fiction: An Expanding Universe as well as two collections of poems, Cut Lunch and Lime Green Chair, for which he won the Anthony Hecht Poetry Prize.

The most influential and admired novelist of his generation in the Spanish-speaking world.
— Susan Sontag - Times Literary Supplement