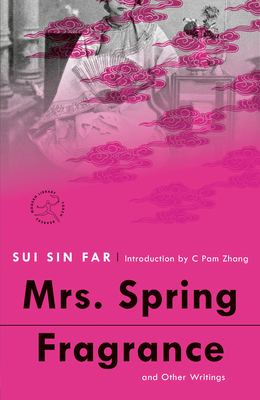 A rediscovered classic of linked short stories set in San Francisco’s Chinatown, by the first published Asian American fiction writer—with an introduction by C Pam Zhang, bestselling author of How Much of These Hills Is Gold

In this rediscovered classic of linked short stories set in San Francisco’s Chinatown, Sui Sin Far portrays Chinese immigrants as they fall in love, encounter racism, and wrestle with their new Americanized identities—decades before writers like Maxine Hong Kingston and Amy Tan.

By turns tender and dramatic, Mrs. Spring Fragrance tells of the Chinese women and men as they confront prejudice and forced detention; choose to assimilate or stay true to their cultural heritage; meet both kind and predatory Americans; and find love, purpose, and understanding in their new home.

These stories are windows into the lives of everyday people in an unforgiving city, who find solidarity and hope in the most unexpected places.

The Modern Library Torchbearers series features women who wrote on their own terms, with boldness, creativity, and a spirit of resistance.