Democracy in America: The Complete and Unabridged Volumes I and II (Mass Market) 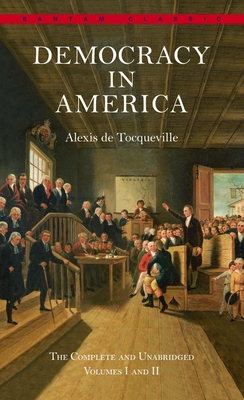 By Alexis De Tocqueville, Joseph Epstein (Introduction by)
$7.99
Email or call for availability

From America's call for a free press to its embrace of the capitalist system, Democracy in America--first published in 1835--enlightens, entertains, and endures as a brilliant study of our national government and character. Philosopher John Stuart Mill called it "among the most remarkable productions of our time." Woodrow Wilson wrote that de Tocqueville's ability to illuminate the actual workings of American democracy was "possibly without rival."

For today's readers, de Tocqueville's concern about the effect of majority rule on the rights of individuals remains deeply meaningful. His shrewd observations about the "almost royal prerogatives" of the president and the need for virtue in elected officials are particularly prophetic. His profound insights into the great rewards and responsibilities of democratic government are words every American needs to read, contemplate, and remember.

From America's call for a free press to its embrace of the capitalist system Democracy in America enlightens, entertains, and endures as a brilliant study of our national government and character. De Toqueville's concern about the effect of majority rule on the rights of individuals remains deeply meaningful. His insights into the great rewards and responsibilities of democratic government are words every American needs to read, contemplate, and remember.

One of America's premier essayists, Joseph Epstein was the editor of The American Scholar for 25 years and has taught--and continues to teach--advanced prose, the reading and writing of fiction, the sociology of literature, autobiography, literature and politics, Henry James, Joseph Conrad, and Willa Cather at Northwestern University. Epstein is the author of 13 books, most recently Life Sentences and Narcissus Leaves the Pool, and has published roughly four hundred essays, stories, reviews and articles in such journals as The New Yorker, Harper's, Times Literary Supplement, The New Republic, Commentary, The New Criterion, The New York Review of Books, Encounter, The New York Times Magazine, and Dissent.

"No better study of a nation's institutions and culture than Tocqueville's Democracy in America has ever been written by a foreign observer; none perhaps as good."
--The New York Times

Praise for the work of Joseph Epstein:

"Epstein is one of the premier contemporary American essayists...What is so remarkable about Epstein as an essay writer is that he'll begin a discussion at some personal place...and end up in another place relevant to us all. He enjoys making language work, not making it jump through hoops for show." --Booklist

"Joseph Epstein is an essayist in the brilliant tradition of Charles Lamb. He moves so effortlessly from the amusingly personal to the broadly philosophical that it takes a moment before you realize how far out into the intellectual cosmos you've been taken."
--Tom Wolfe

"Joseph Epstein is the liveliest, most erudite and engaging essayist we have." --James Atlas

"If Epstein's ultimate ancestor is Montaigne, his more immediate master is Mencken. Like Mencken, he has fashioned a style that successfully combines elegance and even bookishness with street-smart colloquial directness. And there is nothing remote or aloof about him."
--John Gross, Chicago Tribune