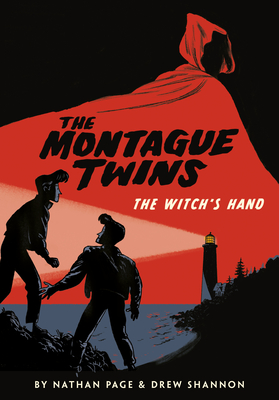 Other Books in Series

This is book number 1 in the The Montague Twins series.

Mystery-solving teens. A quaint New England town. An ancient miscarriage of justice come back to haunt them all. And...magic? This book is terrific fun and if you're looking to extend the summer feeling just a little longer I heartily reccommend that you read it!

Brothers. Detectives. Witches? Meet Pete and Alastair Montague in the first installment of a new graphic novel duology that is the Hardy Boys meets Paper Girls.

Pete and Alastair Montague are just a couple of mystery-solving twins, living an ordinary life. Or so they thought. After a strange storm erupts on a visit to the beach, they discover there is more to their detective skills than they had thought. Their guardian, David Faber, a once prominent professor, has been keeping secrets about their parents and what the boys are truly capable of.

At the same time, three girls go missing after casting a mysterious spell, which sets in motion a chain of events that takes their small town down an unexpected path. With the help of David's daughter, Charlie, they discover there are forces at work that they never could have imagined, which will impact their lives forever.

An exciting new graphic novel from innovative creators Nathan Page and Drew Shannon that is at once timely and thrilling.

A writer of graphic novels and lover of 90s soundtracks, Nathan Page lives in Toronto, where the streets are never finished and the raccoons are definitely not messing around. His works include The Montague Twins: The Witch’s Hand, The Montague Twins: The Devil’s Music, and Who Was the First Man on the Moon?: Neil Armstrong.
Drew Shannon is a Toronto-based illustrator born in London, Ontario, who moved after graduating from Sheridan's illustration program in 2011. Some of his clients include the Globe and Mail, the Washington Post, Reader's Digest, NPR, UNICEF, and more. His first children's book, Extreme Battlefields, with author Tanya Lloyd Kyi, was published in 2016 by Annick Press. See more of his work at drewshannon.ca.

"Hints at a complicated institution of magic and questions about the twins' parents point toward adventures to come in this fantasy-mystery series with impressive depth." —Booklist, starred review

“Humor and character development abound along with thoughtful musings as the novel skillfully entwines its subplots into a tale that ties up every loose end by the time the United States has had its first successful moon landing…Riveting.” – Kirkus (starred review)

“The art is charming. . . . The sequences featuring witches are especially striking. . . . Set against the backdrop of the late 1960s burgeoning gay rights movement, the tale also explores the complications of grappling with an LGBTQ+ identity in more close-minded times.” —School Library Journal

“Reading like an aged-up supernatural reimagining of classic Hardy Boys and Nancy Drew, this magical mystery graphic novel—lushly rendered in full color and set in the summer of '69—makes full use of its vintage vibe to offer something new.” —The Bulletin